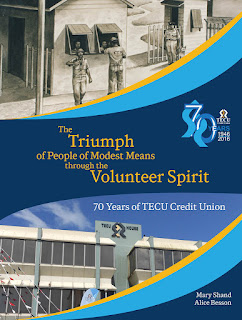 This account of TECU Credit Union, founded in 1946, chronicles the institution’s first seven decades in Trinidad and Tobago.
Born out of the necessities of a post-war, colonial society in which access to credit was limited to few,  TECU’s membership grew and prospered over the years to shape the outstanding success that their credit union is today. As times became ever more modern, political and economic realities changed, and technology revolutionised society over the last decades, TECU grew from strength to strength, adhering firmly to the co-operative principle.
Many principled and upstanding men and women guided TECU over the years. They unselfishly and with great tenacity gave of their time and expertise on a voluntary basis, and worked as employees unstintingly for the credit union’s members. This book lets you meet some of them, and records their wonderful contributions over the years.
TECU today is one of the most celebrated and financially successful credit unions in the Caribbean. Nevertheless,  it has not lost sight of its reason for being: to stand tall as a symbol of The Triumph of People of Modest Means.