A Rada Community in Trinidad 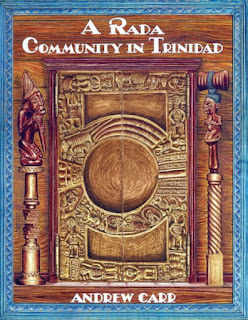 To republish this small part of a much larger body of work, written by Andrew Carr some thirty years after its first publication, is a real privilege. To seek to ensure that the knowledge contained in it continues to be available to coming generations is an important duty and one that we are proud to execute.
Of the several elements today that comprise our very cosmopolitan nation, the Rada, from that part of West Africa now called Nigeria, as they have existed in Trinidad, have contributed significantly to our overall national character and heritage. The existence, up until recently, of the Belmont Rada Community, has helped in no small way to mould the personality of that very particular part of our capital city, bringing to that area a special distinction. One that has, over some 100 years, affected in a positive manner the community on the whole and especially the lives of the extended families and the descendants of those who have made up the compound over the years.
Indeed, to all those whose lives have been touched by this unique body of knowledge, has come a greater sense of the richness of the human experience and the understanding of the universality of God. In truth: “In my fathers house there are many mansions”.
We would like to say a word of thanks to those who have contributed in making this publication a reality. Our original mentor in publishing, Mrs. Olga Mavrogordato, who first drew our attention to the work of Andrew Carr, and to Mrs. Joslynne Sealey, his daughter, who has allowed us to reproduce her father’s work and who has written the Foreword for this edition. Also Mr. Victor Ducurew, a descendant of one of the original founders, whose help and friendship over many years has been of a great value, Ms. Rita Antoine, lovingly called “Gang Gang’’ today by the young ones who run through her yard at Antoine Place, Belmont, and who is presently the keeper of the cemetery, and to Peter Shim who, with great understanding, painted the pictures that are reproduced on the cover.
In loving memory of my grandfather André Joachim of Mayaro and our great friend Miss Rosa Remy who, with much love, great wisdom and on-going generosity of spirit, gave freely to all who, in need, found their way to her door.
As the founder of the compound was himself a Diviner, the cover depicts a Rada Diviner’s Table, used however as a door from beneath which a bright light shines. On either side of the door stands Papa ∑lЄgba on the left and Sobo on the right. May they act as guardian and guide to all those who may knock, seeking entry, in search of truth.