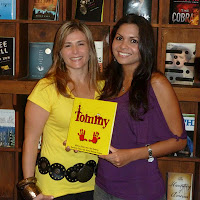 "I have written this children's book inspired by my son Tommy and his illness," writes Paola on her Facebook page. "It came to me through prayer and hope that through this book it reaches out and helps, touches and heals anyone that is or has gone through a challenging time healthwise. Its written from my heart, telling you, the reader about tommy and his story. He is a great little guy and has brought soo many blessings upon us. This book comes with a beautiful message to help anyone dealing with any health problem from minor such as allergies, asthma to major such as cancer. It also helps your little ones understand others who are ill and accept them as they are. All proceeds from this book of course will go to Tommy's medical fund."

Illustrated by Kristina Thompson, Tommy's aunt.
Paria Publishing feels privileged to have been a part of this publication.

The book was printed by local printery Office Authority (great job, folks) and is available in select bookstores in Trinidad and Tobago.
Posted by Paria Publishing Trinidad at 9:57 AM No comments:

"The Tale of the Forest Guardians" by Ryan James

SCAD-Student and former Paria Intern (now aka Paria Extern) Ryan James publishes his first book .... and it is sooooooo good!

Written and illustrated by Ryan, "The Tale of the Forest Guardians" is a story about how the Trinidadian folklore characters Papa Bois and Mama Glo came into being. We assisted him with the layout and book production.

The carefully designed and beautifully crafted book was printed digitally by the Office Authority in a limited edition and a real collector's item. Contact us if you wish to get a copy!
Posted by Paria Publishing Trinidad at 9:47 AM No comments:

Grenada in Wartime by Beverley A. Steele

Have you ever looked up at the sky and seen a huge object coming towards you which you could not identify? Have you ever wondered what would happen if your country could import or export nothing at all? Have you experienced what it is like to have a loved one leave home and never come back? Have you ever waited months on end for a boat arrive that never does? For 60 years to pass and so many questions still left unanswered?


Located in the Caribbean, one would think that Grenada was geographically distant from the chaos that was World War II. But the war not only significantly altered the daily lives of hundreds of Grenadians, but also influenced the culture of the Spice Isle as we know it today.

With Grenada being a British colony at the time, many Grenadians went off to fight in the war, with relatives never knowing if they would ever see them again. The greatest tragedies during the war, however, happened close to home. On what turned out to be a baneful day - August 5th, 1944 - two boats left on an excursion from Grenada to St. Vincent. Only one, the Providence Mark  arrived at its destination. The Island Queen disappeared with 67 passengers and crew and over 60 years later, there are still no answers to comfort those who lost relatives on that unlucky boat. The tragedy is still remembered although with the passage of time it is almost a completely new generation who recall this event, and who are morn.
In 'Grenada in Wartime', each page is a learning experience, and as a reader you will get the chance to witness the reality of the island during the war, as well as how its people dealt, and continue to deal, with the ominous disappearance of the Island Queen. Steele's readers are given the opportunity to take a step through Grenada in the mid-1940s. Look into the minds of a child terrified by the sounds of war planes overhead, mothers and fathers doing their best to protect their families from the privations and horrors of the war, or the fathers and mothers who lost each other or  vibrant youngsters with the mysterious disappearance of the Island Queen. Beverley A. Steele's Grenada in Wartime tells the collective story of what happened to the people of Grenada during World War II- their tragedies and remarkably resilient nature - in one steady breath. Steele acts as the voice of Grenada's population as she records the experiences of Grenada during World War II - the sacrifices, the hardships, the strength, the compassion, the innovations,  and the Grenadian strength of will to keep on going. Grenada in Wartime  also documents an admirable response to national tragedy. No one can ignore the disasters and hard times in their history, but they can keep them close to their hearts while they continue to do what they have to do to keep the society moving forward.
ISBN 978-976-8054-93-1
320 pages, softcover, 7 x 10", illustrated
Available in select bookstores in Grenada and on amazon.com and barnesandnoble.com 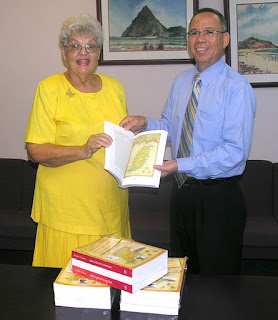