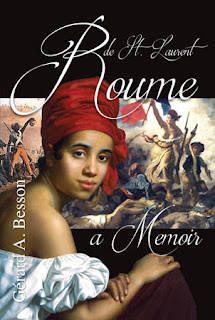 The new historical novel by Gérard A. Besson

In this book, Besson continues his exploration of the French presence in the Caribbean in the 18th and early 19th century and of the formation of a Creole identity in these islands at a time when Atlas truly shrugged in terms of European history, a quest that he began with his previous books "The Voice in the Govi", "The Cult of the Will" and "From the Gates of Aksum".

Partly historical account, partly a fictional tale, "Roume ... a Memoir" takes the reader into the confidence of Marianne, or Soubise as she becomes, and allows glimpses at Roume de St. Laurent's life through her diaries. Roume ... a Memoir is really the memoir of his lover and later wife, and bursts with the excitement of two adventurers sailing through life together, criss-crossing the Atlantic as the winds of revolutionary change blew them, trying to hold on to each other, to a dream of the future, or just for dear life itself.

Available online on amazon.com, amazon.co.uk, and barnesandnoble.com
Watch Gérard Besson reading an excerpt of his book on Youtube 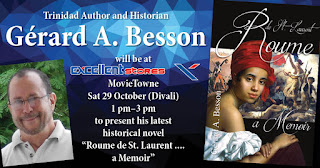 "Jerry Besson’s latest foray into the not so distant but largely forgotten past –a fictionalized memoire of Philippe Roume de Saint Laurent, the man who engineered the 1783 Cedula for Population which birthed modern Trinidad – ebulliently mixes genres in a stampede of individual and historical narratives, exploring aspects of Creole sensibility which have slipped through the seine of recent Caribbean historiography.
Yet this heavyweight, at close to 500 pages and hugely ambitious in its scope (tracing the creolization of Enlightenment ideals and centering the ‘peripheral’ Caribbean at the heart of the ill-fated French and successful Haitian revolutions) lightly sidesteps the tedium of much historical fiction. Roume immerses readers intimately in the lives of such unforgettable imaginary characters as Sarusima the Carib or the demented white Creole Tante Mam’zelle, along with historical figures like Roume’s shape-shifting second wife Marianne ‘Soubise’ Rochard, the Grenadian mulatresse, whose fictional journals both anchor her husband’s narrative of opportunism and also provide another, insider’s point of view of the events he engaged in.
A creole cocktail of political thriller, historical romance and dashing picaresque replete with pirates and lost gold, corrupt financiers, ravishing coquettes, rabid revolutionaries and future emperors (Dessalines, Naploeon), Roume invites us to consider modernity in the New World, or what Besson frequently refers to as “the nightmare nest of slavery”. In dramatic fashion Roume examines the entanglement of Europe and the Caribbean on the cusp of the Haitian Revolution, the crossroads where the spirits of outmoded European feudalism and nascent capitalism, Enlightenment libertarianism and universalism collided with and contested the magical realism of an Afro-Creole worldview uneasily yet expediently allied with the ambitions of the offspring of the entanglement – the conflicted mulattoes.
Although the Haitian Revolution/War of Independence has attracted the attention of writers across the region from Walcott and Lamming, to Cesaire, Glissant and Carpentier, only historians like Laurent Dubois have attempted to chart revolutionary movements throughout the Caribbean at the end of the eighteenth century. In fiction it is only Besson who has made the connection between the Haitian uprising of 1791 and the Fedon uprising in Grenada of 1795, which like similar uprisings in St Vincent and St Lucia challenged the institution of slavery and European hegemony. It is the figure of Roume, a white Grenadian-born creole, who allows Besson to make the connection. Roume’s life journey took him on the wings of ambition and opportunism from Grenada to Trinidad, South America, Europe, Tobago and twice to Haiti, first as an agent of the French crown and then as High Commissioner of the French Revolution.
Besson characterizes Roume as Frontier Man and Creole by birth and sometime conviction, embodying in him the contradictions of the Caribbean white massa slave-owning class, tainted by the legacy of the nightmare nest of slavery. When his first European-born wife Fanny recoils from him, still reeking from his latest sexual encounter on their Grenadian estate, he dashes her exotic fantasies (“a life of adventure, a sensual mixture of fecundity and elegance in a place on the frontier of the New World…she saw herself with him in paradise”) with all the callousness of those who viewed the slaves as property at worst, or “intelligent animals…without souls” at best. “You had to cover them, conquer them, breed them,” he rages at her with plantation pragmatism.
Ironically it is a product of precisely this brutal regime, the mulatresse Soubise Rochard, who becomes his second wife, soul mate and companion for life. Born as Marianne Katronice, the illegitimate daughter of an estate owner and his slave mistress, she crosses the divide erected by the aristocracy of the skin when freed by her dying father. However, in pre-Fanon style, for survival purposes, she cultivates a Creole identity as Soubise, only reverting to Marianne when occasion demands.  She is aware of the common ground which unites her with Roume and which ultimately severs him from the Old World despite his manoeuvring: “As a Creole, descendant of Europeans born in these islands, Philippe had an understanding of the land, climate and the blacks…The salt of the Caribbean Sea ran in his veins…we, Philippe and I understood things differently –Phillipe’s imagination contained a great deal of my own.”
Soubise also recognizes Roume’s fluid identity, knowing “he possessed the actor’s gift of being all things to all men. A born Creole.” His central belief in free will and choice, allied to his insatiable drive to be an agent of change lead him to a major role in the worst excesses of the French Revolution, when as a “blooded Jacobin” he embraces the period of The Terror drawing on an internalized legacy of violence: “we of the slave islands understand how to live without a sense of humanity.”


By positioning Roume at the centre of the revolution in France, Besson echoes the theory of CLR James and others that the modern world was birthed in the Caribbean, in Haiti. Some of the best elements of Enlightenment philosophical theory (equality, liberty) were compromised, betrayed and eventually reversed by the French, because philosophy makes for bad economics and the French Revolution depended financially on slavery as much as the Ancien Régime. As one of the metropolitan characters puts it when dismissing the slaves’ claims to the Rights of Man: “ Rights, human rights cannot apply to them. Soulless, they have not the faculty of choice. Anyway that would mean a collapse of the economy. France cannot afford to free her blacks.” It took the “soulless creatures” of Haiti to effect the praxis of Equal Rights and fight for them successfully, establishing the world’s first free black republic at the same time as Napoleon swept aside the vestiges of the French Revolution to re-establish the old order, in the new guise of an empire.
Roume’s decline is directly linked to the ascendancy of both Toussaint l’Ouverture  and Napoleon. Sent back to Hispaniola as the Republic’s High Commissioner in 1799, Soubise recognizes the dilemma he faces: “ You must make up your mind, are you of the Caribbean, or do you belong on the other side, the Atlantic.” Although Roume has by now arrived at a common understanding with Toussaint whom he reveres (“both believed that a Caribbean interpretation of the republican ideal could be arrived at. This belief had at its centre the certainty shared by them that the African…was a complete human being.”) he elects to put down his bucket with Napoleon, rejecting Toussaint’s offer “Stay and this nation will honour you…You will stand, an equal, with the men who have liberated the New World.’ Roume’s hestitation can be read as symptomatic of the Creole malaise of failing to fully embrace first liberty and much later independence, the same psychopathology Fanon and Naipaul highlighted, which is still with us in the postmodern Caribbean.
Roume can stand alone as a viscerally entertaining text, dramatizing the genesis of the modern Caribbean. Viewed in the context of Besson’s prolific oeuvre, both historical and fictional, we can also read it as the continuing expression of a minority or sidelined narrative in the post-independence history of the Caribbean – the Afro/French-Creole story. Political correctness, politically manipulated Afrocentrism and some of the worst aspects of globalization and (under) development have obscured or obliterated this narrative, which we must all be grateful to Besson for retrieving, in the interest of better understanding who we are now and how we got here."
Posted by Paria Publishing Trinidad at 1:34 PM No comments: 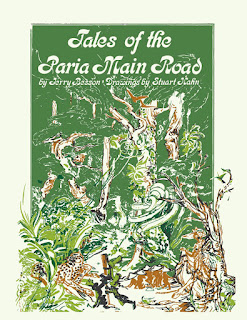