Far from the Mountain by Jai Parasram 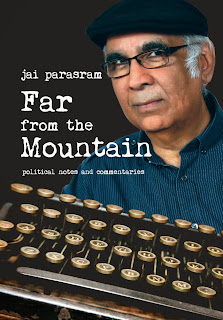 A historical diary of Trinidad and Tobago's political development between 2007 and 2012, by one of T&T's and Canada's veteran journalists.

With a Foreword by Dr. Hamid Ghany

"Several years ago I started writing regular commentaries, mainly about political developments in my native Trinidad & Tobago. They formed an integral part of my personal blog (www.jyoticommunication.blogspot.com), which remains a permanent fixture on the Internet.
The intention was to stay in touch and offer my personal views on how I saw my home country develop. The result is a collection that is neither a history book nor an academic text. It an honest – sometimes emotional – personal account of a journalist who tries to shed light on and seeks to explain some of the issues during a critically important period in Trinidad & Tobago’s political development between 2007 and 2012. It presents a view from afar, perhaps even a clearer view, because from a distance it is always easier to get a proper view of the mountain.
This series of news items, columns and commentaries reflect my thoughts and views on how I saw my country struggle, stumble and then make positive steps as it tried to move forward under a government that, for the first time in the country’s history, represents people from every stratum in the society, regardless of class, social standing, ethnicity or religious belief.
What you are holding in your hands is by no means exhaustive and is really a snapshot of the period, compressing time and space to build a political narrative.
My hope is that you will find material here to generate a national conversation on where we are today and where are heading as we continue our journey past the first 50 years since we pulled down the Union Jack and hoisted our own national flag with a pledge to create a new state forged from the “love of liberty” where each of us would “find an equal place.”
I thought of calling this “A political lime” because in a sense that is what it is – an honest, from-the-heart conversation tinged with my own bias as I responded to the daily events and the changing political fortunes. I have to confess that it pained me to write some of what you would find in these pages but I felt a patriotic obligation to write down my thoughts for posterity."

"We met Jai Parasram in July this year when we were introduced to this veteran journalist by Dr. Hamid Ghany, with whom we had collaborated in 2012 on the production of the official commemorative magazine of the Government of Trinidad and Tobago to mark the 50th anniversary of the Independence of our nation.
Dr. Ghany had a good hunch that Jai’s manuscript would be a good fit with Paria Publishing’s overall work. The author’s concept for this book, “Far from the Mountain”, immediately caught our interest. As a publishing house specialised in the history of Trinidad and Tobago, we saw a two-fold uniqueness in this book: on the one hand, it presented contemporary history in a diary form, which allowed for a depth and spontaneity that “hindsight research” wouldn’t, and on the other hand, its content had previously been published as a blog, which gave it inter-medial linkages that we always look for.
Jai was of course known to us as an early pioneer of television journalism in Trinidad and Tobago. Jai rose through the ranks of Trinidad’s national television service, Trinidad and Tobago Television (ttt) as a reporter, writer, producer, anchor and News Director, and we are happy that he added his memories of TTT as an appendix to this book. Unfortunately, these pages do not have any sound, because like ourselves, many Trinidadians and Tobagonians of a “certain generation” would remember his voice very well from TTT’s nightly news programme “Panorama”.
As a much-respected journalist Jai Parasram travelled the Caribbean, always focused on “telling the story” — telling THE story, concisely and with wit and the sort of sparse commentary that leave it open to the viewer or reader to draw his or her own conclusions. This skill of the journalist of four decades is also very evident in “Far from the Mountain”. Whether you intend to read the short chapters consecutively, or browse and dip into the pages wherever fancy takes you — Jai’s journalistic genius will always add value to your reading experience.
What attracted us particularly to this manuscript was the “witness to history” format. Jai’s epistles accompany an important period of change in Trinidad and Tobago’s political history. On an almost month-by-month basis, he summarises and annotates events surrounding the emergence of Kamla Persad-Bissessar as prime minister of the country. Jai, ever the master storyteller, weaves facts of the past that are easily forgotten in the urgency of the present into an overall narrative that makes them memorable and logical. And the savvy political strategist also shimmers through these pages. Jai takes position and does not spare with ammunition, so reader, be prepared for numerous volleys!
“Although I live in Canada, my feet remain grounded in Trinidad and Tobago,” Jai told us. With “Far from the Mountain”, Jai Parasram has left a legacy of great academic value and a virtual “how to” book for budding journalists, all seasoned with a pinch of homesickness that gives this book its patriotic flavour."

Gérard Besson, Dr. Hamid Ghany and Jai Parasram with the first copy of the book. 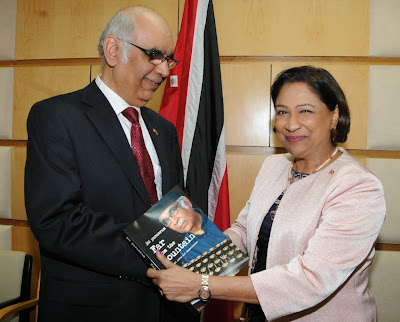 Jai Parasram is presenting the Hon Prime Minister of Trinidad and Tobago, Mrs Kamla Persad-Bissessar, with a copy of his book. Photo by Nicholas Ramjass, Office of the Prime Minister 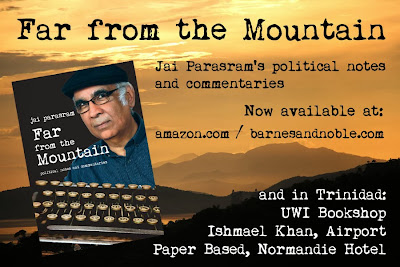 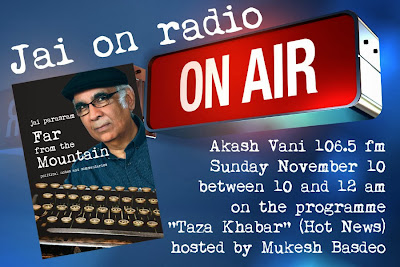 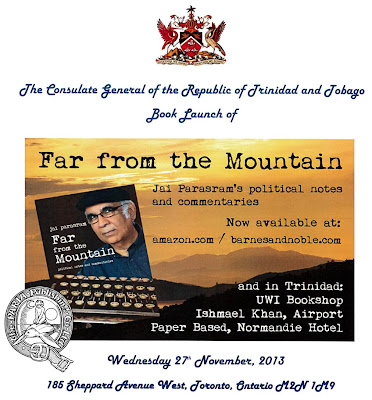 Posted by Paria Publishing Trinidad at 9:26 AM No comments: