Stories from the Cockpit by Andy Campbell

The "Trini children's classic in the making" soon available online in a beautiful softcover version!

From Grommit, the vulture that falls first from its nest and then in love with a human lady; to Squirrel Coconuts, who ends up by mistake in the hold of a plane and has to find his placy in Hyde Park in London; to a little boy who becomes a castaway on a little deserted island and has to engage a flock of pelicans to carry him back home: these happy, adventurous children stories are unmistakingly written by a pilot!

Andy Campbell is a retired pilot with BWIA and wrote these adventure stories during his layovers in hotels in London and New York.

Check out an article by Angela Pidduck on this book, published by the Trinidad Express:
http://www.newsday.co.tt/features/0,118555.html
Posted by Paria Publishing Trinidad at 3:04 AM No comments: 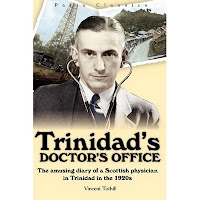 Picture this: San Fernando, Trinidad, 1920. Longing for the tropics, the young medicus Dr. Vincent Tothill signs up with the Colonial Service and comes to southern Trinidad, where he first works in the oilfields, then in the sugar factory, and eventually sets up private practice in San Fernando. With Scottish wit and a subtle feel for the local parlance, this young man describes the people he meets and the events that mark the highlights of his sojourn in Trinidad, and while he obviously fell in love with the people of the island, he does not spare criticism of the Medical Service of the colony. And while he will make you laugh out loud with his sometimes picaresque adventures, his diary is also a valuable anthropological and historical document, describing the language and customs of Trinidadians in that period.
This book was first published by Blackie & Sons in Scotland and is lavishly illustrated with contemporary photographs, some taken by Dr. Tothill himself, and others added from Paria Publishing's extensive archives.
Caribbean, History, Non-Fiction, Auto-Biography
ISBN 976-8054-76-0
6x9", 222 pages
Illustrated in black and white
Purchase the book online:
Amazon.com, Amazon.co.uk, Amazon.de or Barnes & Noble
Approximate price: £ 14.00 / US$ 19.00
Owen Rutter, who wrote the foreword to the 1939 edition of "Doctor's Office", describes Tottie in his book "A Traveller in the West Indies" (1933, Hutchinson & Co.):
"He is a man of acute mind, a shrewd observer and perfectly sincere. he believes in hard knocks and is used to taking them. He makes no bones about saying exactly what he thinks, and since he holds vehement views on most subjects, I found his conversation extremely stimulating. In an island like Trinidad his frankness must be acutely disconcerting, but he seemed to me one of those rare people who can be downright without being offensive. It is easy enough to be rude and to tell people exactly what you think of them; but Tottie barks out what is in his thoughts in so engaging a way that nobody seems to mind. I dare say most people think it is just his manner and that he doesn't mean half he says. [But I am sure he does; and I should be disappointed to find that he didn't, because he talks such extraordinarily sound sense. He is liked because he is fundamentally kind. He has a large practic among all sections of the community, and although he will not spare himself for one who is in real trouble, he is outrageously outspoken to the malades imaginaires, and makes a point of telling languishing young women that what they want s a day's scrubbing and a baby to mind."
By the way, "Doctor's Office" came to our attention through Thora O'Connor, and "A Traveler in the West Indies" through Freda Scott, both wonderful ladies in their mid-90s, who may, just may, have met Tottie and Owen in person in the 1930s! We love to imagine that these authors would have given them their first editions in person, maybe over a good glass of rum punch? Thank you Thora and Freda, for preserving these little jewels in your libraries all these decades.
Posted by Paria Publishing Trinidad at 2:34 PM 6 comments:

First in Trinidad by Michael Anthony

Michael Anthony's classic "First in Trinidad", republished as the first title in our Paria Classics series, is now available online!

Posted by Paria Publishing Trinidad at 3:00 PM No comments:

The folklore of Trinidad and Tobago has pan-Caribbean appeal, as it is shared in common with many former French territories in the region from Louisiana to Haiti, Guadeloupe, Martinique, Dominica and St. Lucia. The beautifully illustrated publication has been celebrated as a milestone publication in Trinidad and Tobago.

Purchase the book online at amazon.com and barnesandnoble.com.
Approximate price: £ 21.00 / US$ 29.00
Posted by Paria Publishing Trinidad at 12:26 PM No comments: