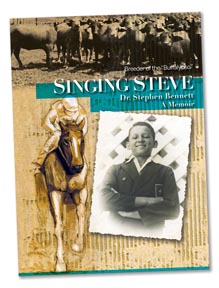 Dr. Stephen Bennett's charming memoir, lavishly illustrated, in a beautiful hardcover edition. The life story of a larger-than-life agriculturist, veterinarian, horseracing aficionado and breeder of livestock — amongst which the once famous Buffalypso of Trinidad.

"Singing Steve", thus named for a racehorse that Dr. Bennett once owned, traces his growing up years as a child prodigy in ... here it comes .... horseracing of all things, to his university years, and his successful ventures upon his return to Trinidad, the home that he loved so dearly.

Illustrated with an cornucopia of photographs, newspaper clippings and other memorabilia from Dr. Bennett's personal archives, "Singing Steve" is the most personal and touching life story published in recent years in Trinidad and Tobago.

Paria Publishing's Dominic Besson designed this book and assisted the Bennett family in getting it printed and published. This gorgeous hardcover coffeetable book, is now available at select bookstores in Trinidad and Tobago. Contact us if you are residing abroad and wish to get a copy (pariapublishing@gmail.com).

Go to photos and additional links about "Singing Steve" on our Facebook site.

Click here to read the book review by Marlon Miller in the Trinidad Express.
Posted by Paria Publishing Trinidad at 7:17 AM No comments: 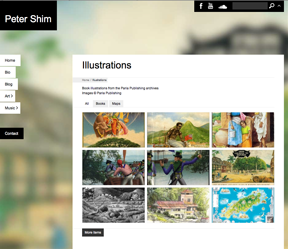 One of Paria Publishing's early creative forces was Peter Shim, multi-faceted artist extraordinaire, whose contributions to the output of Creative Advertising and Paria Publishing remains distinct, valuable, and unique. Peter Shim now has a new website, which features his work in fine art, music, illustration and advertising.

Here is a link to the many beautiful book covers that Peter Shim drew and painted for our company, and of course the well-known Historical Map of Tobago, which is still in print and available from Paria Publishing.

Peter Shim's extensive work in painting can be found in many art galleries, offices, and homes in Trinidad and Tobago, and his skills as a musician on many different instruments keeps people dancing all over the country.

www.petershim.com was conceptualised and built by Peter's daughters Genvieve and Brianna Shim.
Posted by Paria Publishing Trinidad at 7:02 AM No comments:

What Things Are True by Jackie Hinkson 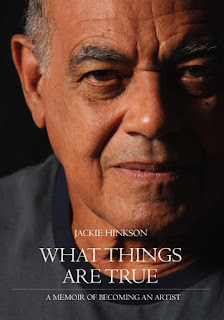 A Memoir of Becoming an Artist


What things are true? This is what Jackie Hinkson has been asking himself since his early introduction into art and, more so, since completing his studies at the University of Alberta whose motto is “Quaecumque Vera” (Whatsoever Things Are True). In 2012, the year of his 70th birthday, he is still searching for the answer in his work.
In this memoir, Hinkson tells of the experiences that helped to shape his vision as an artist; his early family and community life in “Cobo Town” in the heart of Port-of-Spain; his  introduction to painting while a student at QRC and his crucial friendship with Peter Minshall there; the influence of the Central Library and the Art Society on his early formation; his doubts and his single-mindedness while furthering his studies in Paris and Canada; his marriage and the birth of his first child; his return to Trinidad in 1970 where he immediately faced challenges as an artist in a rapidly changing society, and his critical decision to live the rest of his life as an artist working in and inspired by his native land.

Donald ‘Jackie’ Hinkson was born on the 13th of September 1942, in Port-of-Spain, Trinidad. Hinkson began painting in his teens and for over fifty years has remained uncompromising in the pursuit of his calling and prolific in his output.

After studying in Paris and Canada, and by then married, he resolved to live and work in Trinidad and Tobago. At first he  focused on plein-air watercolour and drawing, travelling and exhibiting throughout the Caribbean. In 1982 the Government of Trinidad and Tobago commissioned him to produce 100 drawings and watercolours of the country’s disappearing architecture.
From the 1990s, without abandoning watercolour, Hinkson resumed working in oils and also began producing figurative wood sculptures.
Perhaps Hinkson’s most recognised body of work is his series of very large oils in which he has depicted events from the life of Christ in a contemporary Trinidadian context. This series has been documented in a book, a DVD and a portfolio of prints entitled “And So We Continue”. His other book, “Drawing for Days”, covers forty years of his drawings.
Hinkson has also produced a number of murals and large charcoals that reflect a growing sense of social observation.
In 2010, Hinkson’s numerous sketch pads were inscribed in UNESCO’s “Memory of the World” registry and in 2011, an Honourary Doctorate was conferred on him by the University of the West Indies.
Hinkson and his wife Caryl have three children and nine grandchildren. They live in Trinidad and Tobago, where he continues to work.

Click here to purchase the book on amazon.com and barnesandnoble.com

Click here to read the book review by Bridget Brereton in the Trinidad Express.

Click here to read the book review by Leanne Haynes in Arc Magazine (12 April 2013)
Posted by Paria Publishing Trinidad at 1:43 PM No comments: 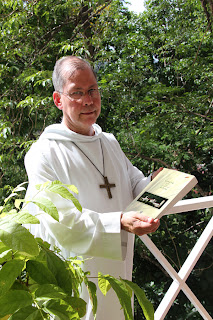 Published on the occasion of the Centenary of the Mount St. Benedict Monastery in Trinidad and Tobago, "Longing to Belong" is the fascinating story of the founder of this, the first Benedictine Monastery in the Caribbean and Central America. It is a compelling and at times tragic story of a man, a human being, with all his virtues and imperfections. Peter De Caigny (Dom Mayeul De Caigny) was first and foremost an "unwavering general" in all the battles he fought for the Church and for the Benedictines. Born in Belgium in 1862, his relentless search for a place to belong brought him to several countries in Europe and to Latin America, the Caribbean and North America. He was always "Longing to Belong" somewhere else. His innate restlessness led to a constant questioning of his current position. His life was punctuated by a series of successes and accomplishments, often to see them taken away by, what some would suggest, his own making. Saddled with a headstrong personality and a lack of diplomacy, Peter De Caigny was nevertheless highly intelligent with an analytical mind. His brilliance as a scholar is attested by the publication of several books and an unpublished three-volume work on his life, which is the basis for this biography. This book, "Longing to Belong" is an attempt to understand and explain his ambition and passion as well as his actions which were often controversial and misunderstood. His extreme sensitivity led him to react strongly to anything and anyone who criticised his good intentions or attacked his honour. Peter sought the solitude of being in harmony with nature. His mind was in a constant state of flux between solitude and activity. He was a leader who took on challenges as they presented themselves, while his soul, his inner being, longed for solitude... Painstakingly researched, beautifully written, fully illustrated, this book is a treasure for everybody interested in Caribbean history, Catholic religious history, or just looking for inspiration in the successful lives of those who have gone before us ...


Photograph: Fr. John Pereira, the Abbot of Mt. St. Benedict, with the first copy of "Longing to Belong"


Available online at Amazon and Barnes&Noble

Posted by Paria Publishing Trinidad at 2:21 PM No comments: 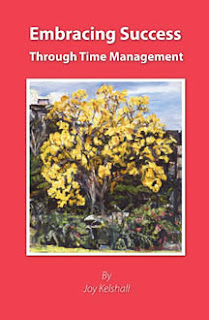 “The bad news is time flies. The good news is you're the pilot”. (Michael Althsuler)

In this, her second interactive tutorial book, Joy Kelshall explores the concept that successful time management is simply a way of life.  It is a continuous process of planning and organizing your time. This will involve your attitude and habits which will directly affect your ability to succeed.  It includes: Definitions of time management, various established systems of time management, problems that occur resulting from one’s attitude and habits, planning & prioritizing tasks, delegating, time wasters and benefits.

"Embracing Success Through Time Management" reveals how “being rich is having money” but, “being wealthy is having time”.  (Margaret Bonnano) In addition this book reinforces, “You might well remember that nothing can bring you success but yourself”. (Napoleon Hill)

The book is available online on Amazon.com and Barnesandnoble.com

By the same author: Embracing Success Through Customer Service
Posted by Paria Publishing Trinidad at 2:21 PM No comments:

Self-Publishers: How to get a quotation

You have a manuscript and are ready to publish it as a self-publisher? Paria Publishing can organise the design and layout and the printing of your book.

As a self-publisher, the financing of your book production is up to you. To find out what it would cost to get your book into print, we can start with sending you an estimate. To price your self-publishing project, we would need the following specifications:
• how many pages does your manuscript have (as a Word document)

Click here to send us a request for quotation with these specifications!
Posted by Paria Publishing Trinidad at 7:05 AM No comments:

Sunday, 17 June: You are cordially invited to visit the Paria Publishing booth at the Scarlet Ibis Room, Hilton Hotel, Port of Spain, at the 57th Annual Seminar on the Acquisition of Latin American Library Materials (SALALM) hosted by the UWI Campus Libraries and the Library Association of Trinidad and Tobago.
For more information on the conference programme click here.
Posted by Paria Publishing Trinidad at 7:05 AM No comments:

Paola Henderson's charming and thoughtful children's book "Tommy", in which her five-year old describes his life with alagille syndrome, is now available online on amazon.com and barnesandnoble.com.
Posted by Paria Publishing Trinidad at 11:03 AM No comments:

My Caribbean - the First Caribbean Touch and Feel Book 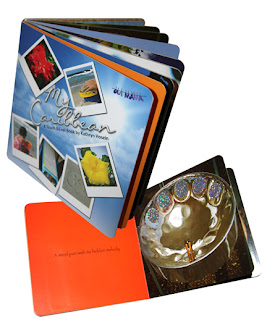 Author Kathryn Hosein, aided by her daughter Alexa, came up with the idea of producing the first ever Caribbean baby "touch-and-feel" book. Photographer Abigail Hadeed did the charming photography, and Paria Publishing developed the layouts and the necessary dielines.
Caribbean children will love the familiar, warm imagery and the interesting textures that are to be explored in this novel publication. Glittering fabric of moko jumbie pants, gooey coconut jelly, the roughness of a bucket of sand on the beach, the velvety surface of a hibiscus petal - these things will intrigue kids not only in the tropical regions.
Just in time for the Canadian "Children's Book Week" - make it a Trinidadian Book Week!