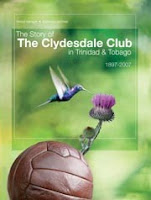 Shark attack! Bull attack! Snake attack! Lost at sea! In these stories, Trinidadian children have the most nerve-wracking adventures caused by their encounters with the flora and fauna of their home island. But not to worry, all's well that ends well ... and the brave save the day! Gorgeously illustrator by talented Trinidadian artist Ryan James, with additional images by Jean Claude Salvatori.

Andy Campbell is a retired pilot with BWIA and wrote these adventure stories at his coffee table, which was thus rendered unusable for having coffee for months on end.

This work opens up new, challenging and daunting perspectives for the practice of the profession in ways never before documented in Trinidad and Tobago.
Ernest Roy Mitchell is one of the leading pioneers of the practice of public relations in Trinidad and Tobago. Having been one of the two individuals who worked together in establishing the Public Relations Association of Trinidad and Tobago in 1972, he is an icon in his own right. These pages contain his life's work: a compilation of 54 of Mitchell's papers, speeches and articles that he produced for local and international fora. The unique material in this compilation offers to professional public relations practitioners, students of the profession as well as corporate communications professionals a broad, incisive and revealing insight into public relations practiced at the Caribbean regional as well as international levels.
7 x 10", 354 pages, softcover
With photographs of the Author's Career
ISBN 978-976-8054-79-1
Available from amazon.com and barnesandnoble.com
Posted by Paria Publishing Trinidad at 9:25 AM No comments:

"And so we continue" by Jackie Hinkson 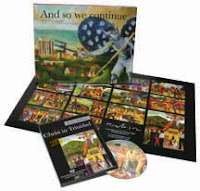 Jackie Hinkson is a plein-air artist of renown in his homeland Trinidad and Tobago. This tremendous book about his series "Christ in Trinidad" contains, besides high-quality reproductions of the works, comments from the artist as well as academic interpretations of this series of 14 large paintings. The paintings are also available as a portfolio of prints, signed or unsigned. The DVD contains a half-hour documentary where we followed Jackie to the various locations where he painted the scenes from "Christ in Trinidad", and documented his explanations.