The Book of Trinidad 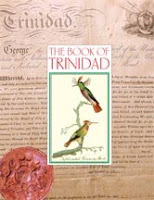 by Gerard A. Besson and Bridget Brereton

The long-awaited republication of the Trinidad classic "The Book of Trinidad" is finally here! With this book, we celebrate our 30th company anniversary in 2011.


“We must remember… and we must remember everything.”
– Gerard Besson
The Book of Trinidad, a perennial favourite with Trinidadians all over the world, is an eclectic mix of travelogues, recipes, newspaper reports, official records, the seminal work of historians and, perhaps more importantly, the oral traditions of the very old whose memories link back to the turn of the century. Fully illustrated with rare pictures from a wide range of sources, The Book of Trinidad has sold thousands of copies since its first publication in 1986.
The history of beautiful Trinidad is a relatively short but multi-faceted one in comparison to its neighbouring islands in the Caribbean. The Book of Trinidad travels through centuries of Trinidad’s life, exposing an experience in which the changing of seasons was the only constant in an otherwise timeless world.
The remarkable thing in the development of Trinidad has been the make-up of its population. Literally, people from all over the world found a home in the island by virtue of their Catholicism or other considerations. Truly antique strains, such as the Rada from West Africa and Maronite Christians from the Ottoman Empire, Brahmins from India, French aristocrats, Corsican revolutionaries, Portuguese converted to Protestanism from Madeira, Chinese peasants, liberated Africans, and Shiite Muslims who have continued to the present to celebrate Muharrum (Hosay) were all poured into the mould of British colonialism and stamped by the prejudices of the time. Writers Bridget Brereton and Gerard Besson bring together the people of Trinidad by commemorating the memory of shared experiences among this plethora of cultures in the development of our beloved country.
Brereton and Besson’s collaboration in The Book of Trinidad draws together the collective experience of the nation’s people to put together the colourful mosaic that is, in truth, our national patrimony.
Bridget Brereton was a Professor of History and the Head of the History department at the University of the West Indies’ St. Augustine campus. She has served on several occasions as the Principal of the University of the West Indies, St. Augustine, Trinidad.
Gerard A. Besson is a publisher, writer and historian. He is the founder of Paria Publishing, a company that has produced around 100 titles in the field of history and folklore. In 2007, he was the recipient of the Hummingbird Medal (Gold) for Heritage Preservation and Promotion.


Available on amazon.com and barnesandnoble.com

From our Readers:
"...just wanted to drop a quick note to let you know that I am throughly enjoying reading this book.  It has now become my travel companion, especially during the long ferry waits to and from  the little coastal town where I live." (from Canada)
Posted by Paria Publishing Trinidad at 3:24 PM No comments: