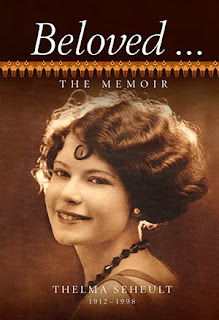 The Memoir of Thelma Seheult

The Yseult Bridges of the 1920s Thelma Seheult's personal story, written simply, captures a moment in time that no longer exists.
Like Yseult Bridges in her classic Victorian memoir "Child of the Tropics", Thelma, a generation later, describes with great charm and warmth her life in 20th century Trinidad: the houses she lived in, the family members and servants in whose midst she was raised, the small and the large adventures of growing up in the tropics, falling in love, raising a family.
A unique and nostalgic account of a vanished world in which life was lived at a slower pace, and in which not all was rosy, as Thelma often points out with a critical eye, but in which being "Beloved" was the most important aspect of all relationships.

"It was nearly 20 years ago that I first read mum's memoir which she wrote down in three diaries. A few months ago, while going through family papers, came across my mother's memoir and re-read it. This time, with 'new' eyes, I recognised my mother's voice; the 'matter of fact' way she spoke clearly came through to me. The memoir confirmed the love, deep respect, and kindness our parents had for each other which lies at the core of my own values." (Robin McDonald)

"Of all human bonds the most variable, volatile, and unclassifiable is the marriage bond. For Thelma and Archie, it lasted 65 years from first courting to the first death. It was love and companionship, but it was something more - a complete tolerance, affection, understanding, generosity towards one another. I always felt they had a foundation from which they could cope with anything - sickness, hardship, tragedy - a centred certainty turn and turn about in a world of ruthless change. When my parents died, we all shed tears remembering the joy and delight they had showed in each other for so long, how in perfect unison they had danced life's dance together." (Ian McDonald)

Posted by Paria Publishing Trinidad at 12:25 PM No comments: