Symmetries of Word Being Made Flesh 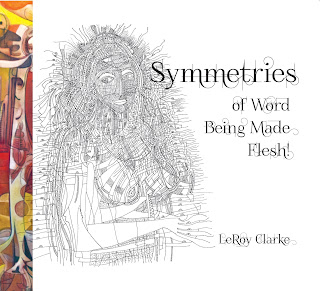 “Symmetries” is a precious little gem was produced in both a hardcover and reinforced softcover version.

Author LeRoy Clarke wanted to achieve a whimsical, gift-like feel for this small book, which features in essence five poems excerpted from “Parables of our Joyless Days”, illustrated with particular drawings from his archives. Lovingly designed and produced, “Symmetries” became exactly what the author had in mind: an appealing, slim volume that fits in one’s palm!

PARables of our Joyless Days 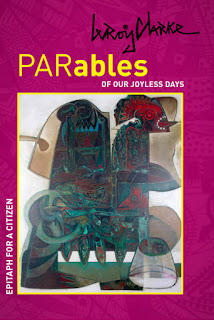 Trinidad painter-cum-poet LeRoy Clarke wrote this masterpiece as an “Epitaph for a Citizen” – this citizen being, in fact, he himself!

Dedicated to his numerous mentors, he explores the changes that have happened in his world and his country, his space, over his lifetime, with particular reference to the recent past. The book is illustrated with drawings from his archives and from his new series “Hayti”. The cover features a gold foiling of title and picture frame, which gives the book a sumptuous feel.

Posted by Paria Publishing Trinidad at 12:18 PM No comments: 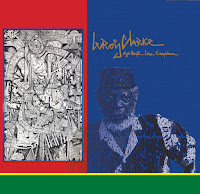 In 2015, Paria Publishing continued the long-standing collaboration with Master Artist LeRoy Clarke and produced an exhibition catalogue, portfolio of cards and portfolio of prints to accompany his exhibition “Eye Hayti … Cries … Everywhere …”

The Eye Hayti series comprised 110 black and white acrylic drawings, varying in sizes from 8×12 inches to 10×6 feet. In this book, we combined the pieces with colourful backgrounds inspired by the custom-made frames that the works were framed in.

Paria Publishing’s Alice Besson was invited by the artist to contribute an essay to the book, which otherwise features excellent commentary by Caribbean intellectuals including the artist himself.

The book is published by and available at the National Museum & Art Gallery of Trinidad and Tobago. 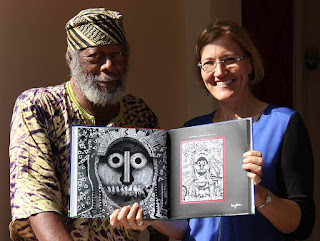 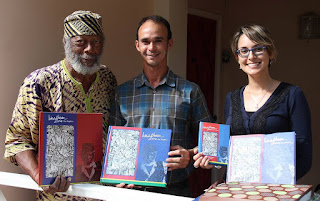 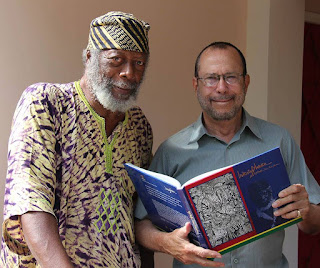 LeRoy Clarke with the first samples of the book, portfolio of prints and postcards that Dominic Besson designed and to which Alice Besson contributed an article.
Posted by Paria Publishing Trinidad at 12:01 PM No comments:

A World of Art 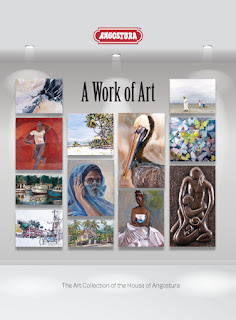 In 2014, the House of Angostura in Trinidad and Tobago celebrated its 190th anniversary

To mark the occasion, the Company assembled some of its extensive collection of works by local painters and featured them in this coffee table book.
In it, the viewer will find a selection of the canvasses that usually decorate the rooms of Angostura’s offices and hallways. It is an eclectic mix of artists who have achieved world fame over a lifetime, side by side with young painters who are showing great talent and promise.
What they share in common is a Caribbean identity, and in this, they reflect very much what Angostura stands for. Like these paintings and their creators, Angostura reflects a slice of life of these isles, and forms part of the very fabric of Trinidad and Tobago. This book stands for what the company strives daily to achieve: to create fine rums and bitters which are A Work of Art.

Click here to see more of our work for Angostura.

A Will and a Way 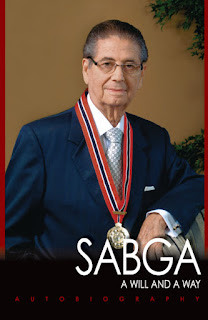 Anthony N. Sabga’s autobiography is a commemoration of the lives and adventures of those bold and enterprising men and women who braved the dangers of the ocean, the hostilities of a new environment and the privations of a residence on a distant coast to procure a better way of life for themselves and their families.

In tracing the history of Tony’s life, we trace the history of the growth of a community and a people who amidst difficult circumstances were able to achieve a large measure of success and recognition for themselves.
Researched and written by Prof. Bridget Brereton and Dr. Raymond Ramcharitar, this book is fully illustrated with images from the archives of both the Sabga family and the many companies that Tony Sabga leads.

Paria Publishing is particularly pleased to have been asked to undertake the book design and production because of our long-standing association with the ANSA McAL Group. In 2007, we researched, wrote and produced their company history, “125 Years of Business in the Caribbean”.
Click here to view on our website. 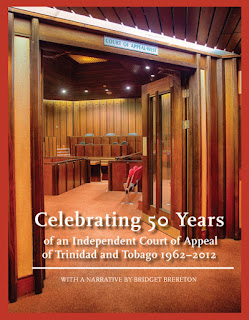 This publication celebrates the very rich legacy left by a group of outstanding jurists who took the administration of justice in our country from colonialism to independence and beyond.

It also records the more contemporaneous efforts by a new generation of men and women to further transform the resulting creation – the Judiciary of the Republic of Trinidad and Tobago, and especially the Court of Appeal – into a high performing professional institution.

Lavishly illustrated with picture material from the Judiciary’s archives and photographs taken by Mark Lyndersay, this hardcover book has a narrative researched and written by Prof. Bridget Brereton of the University of the West Indies.

Posted by Paria Publishing Trinidad at 7:33 AM No comments:

A Legacy of Local & Global Expertise 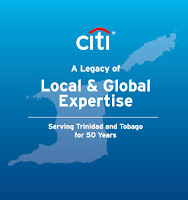 On June 8, 2015, Citibank (Trinidad & Tobago) Limited celebrated 50 years of unbroken service to the Republic of Trinidad and Tobago

This Golden Jubilee is a significant milestone for the Bank. Paria Publishing was entrusted with preparing this hardcover publication, which on 70 fully illustrated pages chronicles Citibank’s journey from its beginnings in 1965, commemorating significant business and philanthropic milestones and celebrating the people that made them possible.

Available from Citi Trinidad & Tobago
Posted by Paria Publishing Trinidad at 7:23 AM No comments:

These compact and attractive books celebrate the annual Distinguished Jurist lectures hosted by the Judicial Education Institute of Trinidad and Tobago (JEITT).

Each year the book is given a different colour and the wording on the front changes, as it is an excerpt from the speech given by the Distinguished Jurist.

Everything seen in yellow on the covers is gold foiled on the printed copies. These are beautiful and inventive keep-sake books that can be downloaded on TTJEI’s online bookstore.

On the 29th September, 2011, Sir Shridath Ramphal, Q.C., became the inaugural speaker at the Judicial Education Institute of Trinidad and Tobago's Distinguished Jurist Lecture Series. Addressing such issues as "A Shared Legal Heritage" and "A Caribbean Supreme Court," Sir Shridath explores various landmark cases and the overall historical process that led to the creation of a regional jurisprudence.

2012: The Role of the Court of Appeal in Developing and Preserving An Independent and Just Society
Second Distinguished Jurist Lecture 2012 by Mr. Justice Adrian Dudley Saunders

This lecture by the Honourable Justice Adrian Saunders, delivered on the 12th July 2012, examines the role of the courts of appeal in the Caribbean as the final indigenous court. The issue is explored with great clarity and probing insights, mixed with a measure of refreshing story and anecdote. It argues affirmatively and compellingly for the relevance, role and responsibility of courts of appeal in the development of their societies

2013: The Continuing Relevance of the Jury System in the English-Speaking Caribbean
Third Distinguished Jurist Lecture 2013 by Sir Marston Gibson, K.A.

In this third Distinguished Jurist Lecture delivered on the 11th July 2013, Sir Marston Gibson K.A., Chief Justice of Barbados, explores the issue of the relevance of the jury system to the contemporary needs of Caribbean society. Sir Marston gives a historical analysis of the development of the jury system, outlines its challenges and opportunities in the context of modern Caribbean society, and suggests a few alternatives.

2014: The Yin and Yang of the Commonwealth Constitutional Social Democracy: Change for Stability and Progress
Fourth Distinguished Jurist Lecture 2014 by Dr. Leighton Jackson

On the 10th July 2014, Dr. Leighton Jackson delivered the Judicial Education Institute of Trinidad and Tobago's fourth Distinguished Jurist Lecture. Dr. Jackson's lecture explored the application of the Chinese philosophical concept of the Yin and Yang in relation to the tension between stability and progress in the constitutions of the Commonwealth Caribbean. While he closely examines issues such as the post-colonial power model, the Caribbean education system, and present leadership styles, Dr. Jackson proposes a shift of perspective in Commonwealth Caribbean society's relationship to stability and progress as forces that must exist in harmony instead of opposition in order to be truly progressive.

Posted by Paria Publishing Trinidad at 12:34 PM No comments: 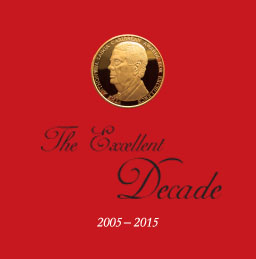 A coffee-table book by and about the Anthony N.Sabga Caribbean Awards For Excellence, 2005-2015

Paria Publishing were the producers of ANSCAFE's commemorative coffee-table book "The Excellent Decade", an inspiring compilation of texts by and about the Awards scheme and its laureates over the past ten years.

Available from the ANSCAFE Secretariat


Posted by Paria Publishing Trinidad at 12:12 PM No comments: