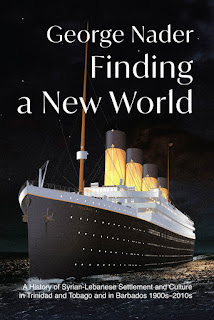 George Nader traces the growth of Syrian Lebanese settlement in Trinidad from the arrival of a few determined immigrants in the late 1800s to the present day. Using information from multiple sources, he describes its gradual transformation into the vibrant and multifaceted Trinidadian society which exists today.

This seminal study undertaken by Nader in the 1990s and finalized by him and his daughter in the 2000s, examines the data gleaned from population surveys and censuses in Trinidad and Tobago, Barbados and the wider Caribbean which was regularly undertaken by the British Colonial governments of the Caribbean, and, after independence, by the governments of Caribbean nations occasionally from the early 60s to the present. This is the first time that the Syrian Lebanese diaspora in the southern Caribbean has been examined in detail against the backdrop of the indisputable data gleaned from those sources.

Feeling an obligation to the Syrian Lebanese community to write a history of their society, where they came from, how they came to be in Trinidad and how they became a part of their new home, Nader was able to tell the story of the community as a whole and at the same time provide glimpses into individual experiences. This was an academic pursuit, but also one that aimed to tell the stories of those who settled in Trinidad and those who were born in this new world.

Set against the backdrop of the history of the former Ottoman Empire and that of Trinidad and Tobago, this book gives a fresh and scientific view of why the Syrian-Lebanese had to choose to leave their former home, setting sail with the intention of “Finding a New World”.

Posted by Paria Publishing Trinidad at 6:58 AM