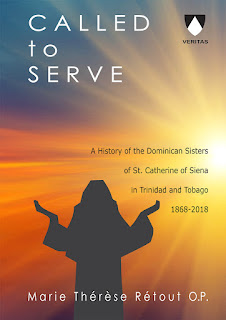 This third revised edition of “Called to Serve” is virtually a new book with an enormous amount of information added by the nonagenarian author, Sister Marie-Thérèse Rétout.
It was published to celebrate the 150th anniversary of the establishment of the Order of St. Catherine of Siena in Trinidad.
The old content was rearranged in chronological order and by topic, covering the work of the Sisters at the Leper Asylums at Cocorite and at Chacachacare, their founding of St. Dominic’s Orphanage and of Holy Name Convent. The new content added updates the reader about new developments in these ventures, and features “Sister-by-Sister” milestone achievements and information about the Order’s founder. Lots of additional visuals and interesting photos can be found in this third edition, along with a detailed index and last but not least a list of Sister Marie-Thérèse’s other books.

“This new venture of love by Sr. Marie Thérèse Rétout, at age 96, to undertake an update of her book, Called to Serve, speaks of an indomitable spirit/soul, that refuses even to be regimented by age.
God has given Sr. Marie Thérèse a wonderful gift for writing which she is compelled to use as long as she has life and strength. I admire her persistence in wanting to give of herself—even as she faces her frailties and limitations—to accomplish all that this arduous task demands of her.
The Congregation of St. Catherine of Siena, this year 2018, celebrates 150 years of being established in Trinidad and Tobago. It is fitting that this new edition of Called to Serve is published during this year to mark the Jubilee.” (Sr. Thérèse Antoine, O.P.)